Govinda Dasu is neutral about Zucchini. He feels that sometimes it is kind of good. However, it is certainly not his favorite. He much prefers aloo fry. That being said, his parents want him to eat green vegetables, so they make him eat Zucchini. And, it is soft and doesn’t require too much chewing, so he finds it kind of good sometimes with annam (cooked rice), pappu charu annam, or perugu annam (yogurt rice). 1. Clean and peel the Capsicum, Aloo, and Ginger

You can enjoy the South Indian Capsicum Aloo Koora with plain rice. Govinda Dasu prefers when you give him less capsicum and more aloo.

Govinda Dasu always liked Broccoli Koora as his third or fourth favorite dish after Potato Fry and Cauliflower. Broccoli was often tied with Beans in his Santa Clara home.

1. Clean and peel the Broccoli, Aloo, and Ginger

You can enjoy the South Indian Broccoli Koora with plain rice. Govinda Dasu likes to mash up the broccoli and rice with his hands, mix them up, and eat.

Make sure to eat with your hands!

If you need help eating with your hands, consult this Wilbur Sargunaraj video.

Andhra vegetarian cuisine is noted for its spicy chutneys, which are called Pachaddlu in Telugu. Andhra meals remain incomplete without a course of pachadi annam, plain rice mixed with pachadi, usually with some ghee. Pachadi is usually made with raw or partly cooked or smoked vegetable. Sourness from the vegetable or tamarind, if the vegetable itself does not have intrinsically sour taste, is important. Even more important is the usage of a healthy amount of green and/or red chili peppers. Occasionally there are non-sour varieties of chutneys. Fenugreek seeds are an important ingredient, except in pappu pachadlu (dal based chutneys), in which they don’t belong! This chapter will group several types of pachadlu together as they all have similar if not identical recipe. Because of spice, oil and sourness, often pachadi lasts long. Some pachadlu are almost pickles, lasting at room temperature for weeks without spoiling. It is a good thing that they last long, as one can not consume large helpings of pachadi at once. Whenever I was about to eat my third helping of pachadi, my dad would say: pichchi vedhava pachchadi anta tinnadu – meaning the fool ate the entire amount of pachadi. Consumption of excess amount at once is not good for your stomach. However, it is hard to keep away from mouth watering pachadlu of Andhra!

Gongura pachadi is perhaps the most well known of Andhra recipes. It is also my favorite. My father told me about his uncle from Guntur used to arrive late evenings with a bag full of gongura and red chili peppers that Guntur district is famous for. He worked for the Indian Railways and was a frequent guest. Apparently the best gongura pachadi that my father ate is made by his Janaki attayya, whose husband is this late arriving uncle from Guntur. My grand mother told us stories of how she had to cook late evening to feed him a hot meal. However, you don’t need an uncle from Guntur to arrive late evening to get started. You start by acquiring couple of bunches of Gongura leaves from the New India Bazar on El Camino. These sour leaves are available in most big Indian stores in US metropolis these days. My father says that it is easier to buy Gongura leaves in the USA than in North India. If you do not have whole dry red chili peppers, fenugreek and black mustard seeds, you should pick those up at the store, along with a box of LG asafetida powder. If you can buy Guntur dry hot chili peppers, you are in luck. I am assuming you stock salt and a heavy oil like Peanut or Sesame or Safflower at home. You should, if you want to cook Indian!

Gongura leaves need to be plucked (remove the red petiole entirely), washed and laid out on cloth to soak out the water on them. The task is easiest accomplished by spreading out on the kitchen table and get your family to help with the task. Most of the bunch you picked up from the store is wasted because of branches and all the tough matter – you should avoid paying by-the-pound for gongura bunches. We often do the leaf preparation the night before and collect them in a bowl before breakfast.

I hope you remembered to have started cooking some plain rice ahead of the gongura pachadi making. Your mouth will be watering and you can dive in promptly. In principle, the pachadi can keep for days at room temperature and weeks in the fridge. In practice, the pachadi will be finished long before that.

Note: Roasted cashews and powdered elaichi (cardamom) can be prepared ahead and placed on the side for use in steps 7 and 10.

Anyone who knows me should know that Aloo Fry has to have a chapter of its own in the Govinda Dasu recipe book. Few Friday evenings in Santa Clara went by without Aloo Fry on the menu. Besides, if you have been to my room at home or been to my grade school presentation, you would have seen my famous Aloo Fry poster.

My father tells me that his maternal grandmother owned a heavy brass fry pan, which played the most crucial role in the preparation of her famous Aloo Fry. A heavy 12-inch non-stick pan is definitely an acceptable substitute, as her brass pan has long bitten dust.

Although not part of the Govinda Dasu Aloo Fry recipe, you may want to start to cook some plain rice in the back burner before you start preparing the fry.  You will want to immediately start eating when the fry is ready! 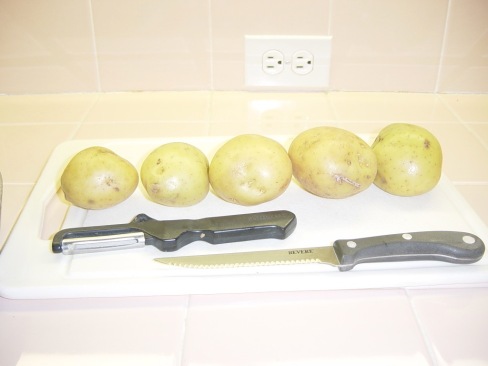 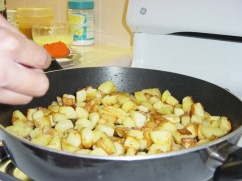 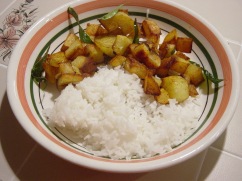 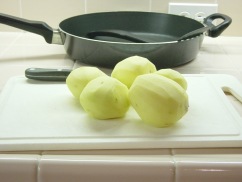 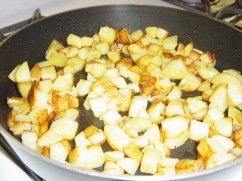 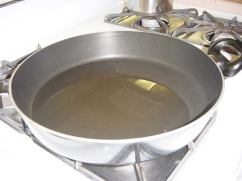 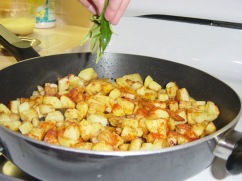 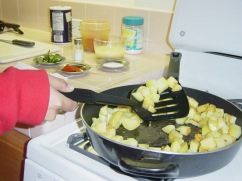 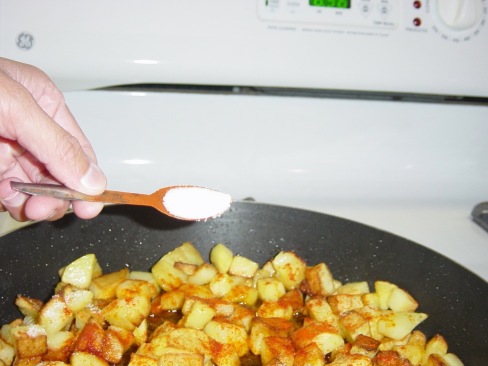 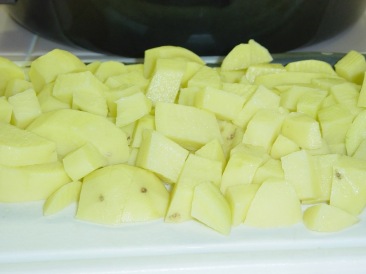 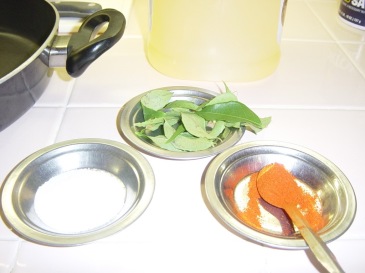 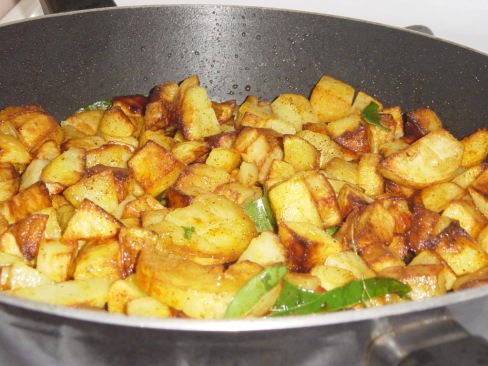 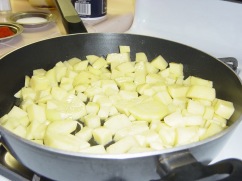 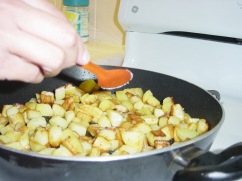 If you are tempted to eat the Govinda Dasu Aloo Fry with all courses of meal including the yogurt-rice course, it is normal. If you finish the aloo fry without sharing with anyone, you should feel free to forgive yourselves, as it is not your fault.

Potatoes and chili peppers trace their origins to South America, but make no mistake that this recipe is definitely from Krishna Region, where the ancestors of Govinda Dasu are from. After all, red chili peppers have made Guntur their home.

Home is best defined by the smells, tastes and the looks of the foods, which the family partakes in, together. We go off on those long culinary expeditions, only to return home to those family meals. Our family tastes, originating in the brahmin homes of Andhra Pradesh in India, are passed on to me by my parents and grandparents, as they were raising me in the Silicon Valley. While we cannot trace back the ingredients beyond the Safeway at Rivermark, or the New India Bazar on El Camino, the recipes, minimally refined my parents, go back to my ancestors, geographically separated from us by thousands of miles and several generations. Heavily spiced they may be, but subtleties are unmistakably familial. Static, the recipes are not. There is always innovation, adaptation and amalgamation, sometimes scorned by the purists in the family, but eventually accepted with pride as our own. I am sharing these recipes with you with the hope that you will import some of them, to satiate your own palates for generations to come. I will tell some stories along the way to keep you amused.

Of particular note is the influence of mothers and grandmothers on our family palate. River Krishna and its canals meander through the rich agrarian communities near the new capital at the old city of Amaravati of Andhra Pradesh State. My grandmother’s family hails from Nuzividu, which is famous for its mangoes. However, it is her grandmother from Vuyyuru, who influenced my meals in the Silicon Valley. Much like the genes in my blood, some of my great-grandmother’s mukkala pulusu seems to flow in me! Recipes coming from this branch of my family will be labeled as from Krishna Region. My mother’s ancestors hail from a lost village south of Krishna, on the banks of the temperamental Penna River. They migrated further south to Coimbatore in Tamil Nadu, and then to Delhi and Simla, way up North. Yet, my mother’s cooking unmistakably traces back to the southern cooking style of Andhra, with some traces of Tamil styles. My mother’s recipes will be labeled as from Penna Region. North of Krishna flows the mightier Godavari with its expansive delta – if there is any influence of their Kona Seema style in our recipes, it is only accidental. Hailing from Krishna and Penna Deltas, I am raised to scorn at those foreign tastes – who in the right mind would put jaggery (raw sugar) in avakaya (raw mango pickled in mustard). Although my family heritage patriarchally dates to 1400s and is documented to hail from the State of Maharashtra to the west of India, there is little from Marathi style in our palate. After all, any excessive use of besan (chick pea flour) is also to be scorned at. If there is any influence of Marathi style, it is because my grandmother spent her summer breaks in Lonavala and Parbhani, in the far reaches of Marathwada, where my grandmother’s father worked for the Deccan railways, although he hailed from Nuzividu. Apparently, she picked up the techniques of making chapathis and aloo curry with besan during those trips. Although my grandmother spent much of her life in the city of Hyderabad, there is no trace of the famous Hyderabadi cuisine in our family recipes. After some research I concluded that this aversion to Hyderabadi cuisine is only because of one particular popular ingredient that is abhorred by our family, allam-ellipai (ginger & garlic) paste. While I may positively enjoy the garlic rolls at Tomatina’s in Mercado, I would never tolerate garlic in my beans koora.

My parents entertained friends and insisted on cooking gigantic meals. They worked together and competed all day to cook up a storm. Those meals were special, but with quite a bit of corruption, for example by including recipes adopted and adapted from Punjab and beyond. I will indicate those as foreign foods. Bon Apetit!