Nestled amongst the green fields north of Vijayawada, along the banks of a canal carrying the water from the Krishna river, in the village of Thotla Valluru, is a beautiful small temple of Lord Venu Gopala Swamy. Apparently the temple was established by the followers of the great Vishnavite Saint Ramanjuacharya, who helped revive Hinduism in India, several hundred years ago. The remarkably well maintained gopuram leads one to the lovely temple. Inside, the dark Venu Gopala idol is decorated with an exquisitely engraved brass arch depicting two of his consorts, Rukmani and Satyabhama. On the right of the Lord is the sanctum of His heavenly consort Sri Devi, and on His left resides His earthly consort Goda Devi. Inscribed in the wall of Sri Devi’s sanctum, Anjaneya respectfully and adoringly watches over his Lord’s consort. 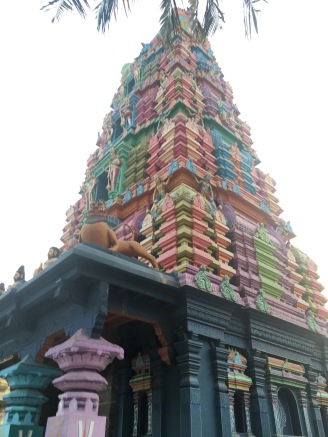 Outside in the courtyard is a room with Venu Gopala’s vahanas. The beautifully carved brass  Anjaneya and Garuda vahanas, artfully painted enhancing features such as eyes and beak, rival those at Tirumala. The unique ashta-nari vahanam at Thotla Valluru depicts brightly colored women figurines vying to support their favorite Lord Venu Gopala.

This Venu Gopala temple culture is an apt example of the madhura bhakti marga evolving from the dwaita philosophy of Ramanuja. Indeed the mythical characters depicted in the temple remain representative of the lives of hindus making pilgrimages to Thotla Valluru over the years. Apparently the vishnavite jeers hailing from Ramanuja sect still visit annually for grand temple festivities. Howe
ver,  gone are much of the rich land holdings of the temple, usurped by local landlords. Apparently, those landlords are so abhorred that their families are no longer welcome in the temple. Unfortunately, gone or the throngs who visited this temple in the past as well. And, most noticeably totally gone are the devadasi’s who adoringly sang and danced for the Lord.

A little over a century ago my grand-father’s great-grand-father Mahakavi Dasu Sriramulu must have been enthralled by the temple and its culture, and beholden by the Lord Venu Gopala himself to pen his beautiful padams in his honor. Apparently he was sitting in this temple courtyard while writing the lyrics like valachiti rA ninnu, which we heard set to durbAru rAgam on the way to the temple. Perhaps, iddari pondElara in jhinjhUti rAgam is referring to Rukmani and Satyabhama. Although the culture of devadasi’s remains alien, this visit to Thotla Valluru temple provided us some context, if not clarity, for the adoring devotion of those women folk to the dark Lord Venu Gopala.

The temple is currently maintained immaculately by Mr. Panchangam Appanna Kumar, using the income from the remaining land holdings and occasional visitors like us. I strongly recommend a visit to Thotla Valluru to all my extended family on their next trip to Vijayawada area. Perhaps, someone amongst you will take good pictures and videos making a virtual visit possible. Mr. Kumar said that he will be bringing out a book on the heritage of this small old temple. Let’s contribute what we can to sustain this illustrious heritage.

View all posts by gdasu